Ayutthaya was colonized by King Bayinnaung and Siam was part of his empire. 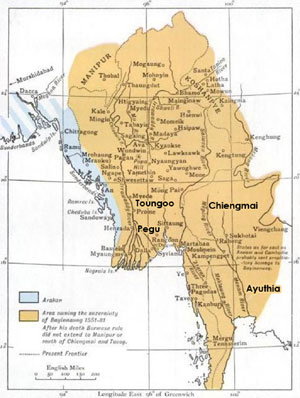 Although Kings of Myanmar no longer occupying 100% of the territories of Siam Kingdom, the trading between people of two countries still continued.

During King Rama III’s reign (1824-31) in Siam, people from Myanmar namely Burmans, Toung Thu (Pa’O), Shans, Pegouans in different groups using hundreds of bullock carts to do trading especially in Northern part of Siam.  These people were also known as Kolas (or) Gulas. 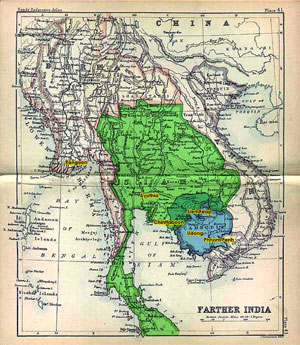 Discovery of the veins around Chanthaburi area made some of the Kola traders switching their business as gem miners. Some more people from Myanmar also joined to work at ruby mines.

Maung Khunti, a hunter from Myanmar found sapphires in a river bed in a thick and dark forest near O Toung Hill (Pailin region).

Due to that news, Maung Visa and a team of Burman miners went to O Toung Hill (tdk;awmif?)to explore. Large amount of sapphires were found in a river bed around Vong-Song-Vong, Khlong Tavao villages of Pailin.

), Chan La Bok & Boyakar of Pailin. It was a beginning of the Gem Rush and more miners especially Burmans and some Indians arrived to start the mining and trading.

As the Burmese community grew in Pailin region, they elected “the Chief of Bumans" themselves.  Maung Khunti who found the sapphires first around Pailin was the elected chief. The Chief eventually became an absolute ruler and exercised power over not just Burmans but all inhabitants around the mining area.

Even the region was under the influence of Siam Royal court, Burmans or Kolas as the British subjects could claim extraterritoriality and answer only to the British Embassy in Bangkok or British Consulate at Chanthaburi.

The Chief of Burmans, Maung Khunti was brought in and introduced to Siam Royal Court in Bangkok by the British Consulate. He was awarded the title “Hluong Mani Yuttheanea” (Luong Mani Yut Thena) and also appointed as a “Tax Collector” of the mines (

Maung Khunti was initially from Upper Burma who hunted around Pailin Forests and was said to be feared by the forest spirits. He was spoken of as the legendary founder of Pailin. He is depicted as the chieftain of Kola people who discovered the gem veins and as the patron of many temples (Stupas) built in the region.

Gem rush begins in Pailin. More miners and traders flowing in and according to Borneo Company’s records, it’s steamers transported 4912 British Subjects (mainly from Myanmar) from Bangkok to Chanthaburi between May-December 1879.

Those people usually had to travel 3 more days from Chanthaburi by elephants to reach Pailin.

) was the new chief and collected 2.25 ticals from everyone who worked at the mines.

1881: Series of disputes over the lack of clear legal statues for administering Pailin region were settled between Burmans and Siam Royal Court. Pailin began to develop in earnest after that.

During early 1880s, Pailin became “a state within The State”. The Tax Collector (or) The Chief collected 3 ticals from the miners, 2 ticals for the King of Siam and 1 for himself. According to the Siam Court’s records, the King received around 4000 ticals annually.

Government of Siam granted the extraction rights of Pailin mines to an Italian. But the Chief was still controlling the miners and collecting tax of 3 ticals.

But the company subcontracted the rights to a Burman by the name of Maung Soy (Maung Swe? Maung Shwe?). Maung Soy then collected the permit fee of 3 ticals ($1.80) per person or 5 ticals ($3.00) per family per year in order to enter the mine area whether working as miners or traders.

MMaung Soy came from Upper Burma and lived in Pailin for nearly 30 years. He was in the surface just the leader of a group of foreigners but in actuality, he became the absolute ruler of Pailin.

Total of around 5000 miners were employed at Pailin in 1898 and most of them were Kolas and Pagouans (Toung Thoos?). Besides them, Chinese, Indian, Afgan merchants were trading in Pailin not necessarily just gems also clothes, foods, etc.

Religious worship in the evenings can be seen at the Buddhist temple (Stupa). Usually with a procession led  by a group of musicians followed by worshippers – the men first and then women carrying platters loaded with offerings mainly flowers.

From Siamese administration, Pailin together with Battambang, Siem Reap was incorporated into the territory of Cambodia as a result of negotiations between French and Siamese.

Even though French Colonial administration tried several attempts to control Pailin region, they did not obtain the desired result. Ultimately, they had to grant maximum autonomy to Pailin mining district due to (1) lack of any alternation o n their part (2) lack of any intent on Maung Soy’s part to extricate himself from French colonial rule.

More people from Myanmar mainly from Shan State migrated to Pailin during early 1900s and Kola community (small Union of Burmans, Toung Thoos andShans) in Pailin and surroundings getting bigger. Kolas from Pailin travelled to Europe especially to France more to learn more on gemmology. They adopted the heat treatment method learned from France and value added to the gems that they mined. Residents of Pailin getting wealthier, more educated so that numerous volumes of literatures, novels, poems, dance and music which were unique to Pailin were developed since then. 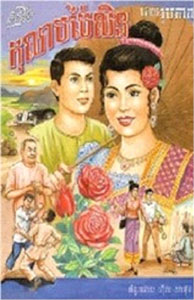 Pailin economy slowed down a short while during WW-I from 1914 -16 since most of the gem markets for Pailin miners were in Europe.

Myanmar Calendar Year 1287: Four small stupas were donated by Kolas at the four corners of Aung Sulamani Stupa. Their names were engraved in Burmese language by the donors. 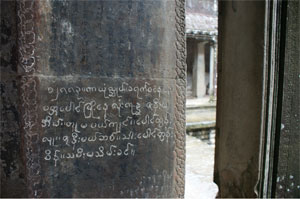 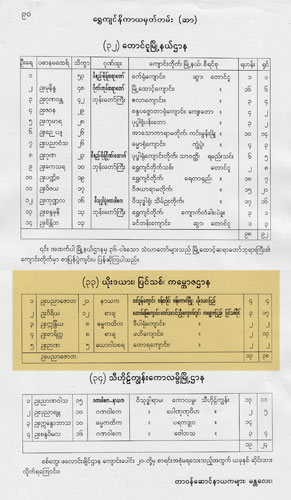 Myanmar Calendar Year 1300: Another Stupa which is smaller than the main Aung Sular Mani Stupa was built at the lower level of Phnom Yat Hill. The stupa was restored at the year 2000 by a family resided in the United States. 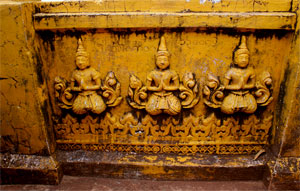 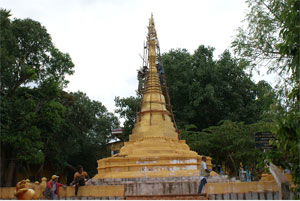 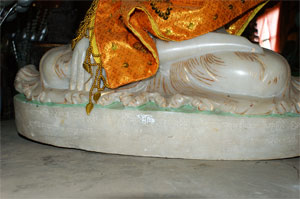 The main gate with the long corridor towards the main monastery was completed. Donors’ names written in Khmer and Burmese names still can be seen along the corridor and at the entrance.

Khmer Rouge entered and occupied Pailin region and all the residents were either sent to the camps all over the country or fleeing away to Thailand and then to third countries such as US, Canada, France, etc.

The chief monk of the monastery also the care taker of the Aung Sula Mani Stupa was evacuated to Thailand by the disciples. But no further information regarding him and Kola people who escaped together with him was available.

Khmer Rouge lost control over Pailin region and new migrants from other parts of Cambodia started to reside in Pailin. 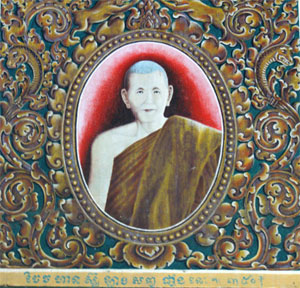